The Rise of Eco-friendly Pearl Farming by Brian Clark Howard

Humbert is the manager and owner of Kamoka Pearl, a boutique family business on the French Polynesian atoll of Ahe that is trying to shake up the international pearl market by raising pearls more sustainably.

“It’s like another planet,” Humbert told National Geographic about Ahe, an atoll that sits just a few feet above sea level, about 300 miles (480 kilometers) northeast of Tahiti in the Tuamotu Archipelago. “There’s no dirt, it’s just sand and coral, so the bottoms of your bare feet don’t even get dirty.”

Kamoka Pearl was founded in 1990 by Humbert’s father and brother. A year later, halfway through college (where he studied marine biology), Josh Humbert joined the family business, which raises high-quality “Tahitian pearls” for the international jewelry market.

Humbert had spent part of his childhood growing up in French Polynesia with his family, under a roof of palm leaves near the ocean. He returned to Polynesia as an adult, although he moved back to the U.S. three years ago, to Oregon. His father, who is French, stays at the farm year-round. Humbert’s mother is American. 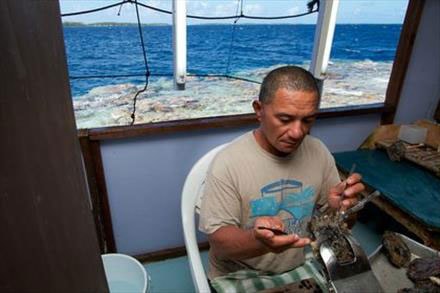 A skilled Kamoka worker implants a “bead” into an oyster to stimulate pearl growth. 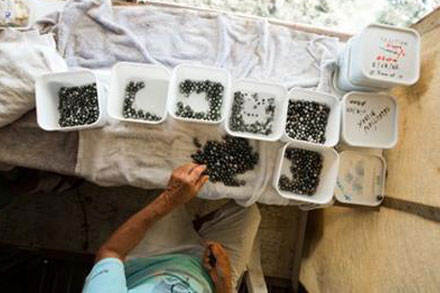 To raise pearls, Kamoka cultivates a native species of pearl oyster, Pinctada margaritifera. The oysters are placed in baskets or nets to protect them from predators, which include triggerfish, sea turtles, and eagle rays. Made out of plastic, those baskets or nets are hung vertically every three feet (one meter) on horizontal lines that range from 330 yards (300 meters) to 1.3 miles (2 kilometers).

The end of the line is anchored with a concrete block at the bottom of the lagoon, 100 to 200 feet (30 to 60 meters) down, or it is tied to a coral formation on the bottom. Vertical stabilizers are placed along the line, and buoys are interspersed to help hold the oysters at a depth of around 20 feet (6 meters).

The next step involves seeding the oyster to produce a pearl. An oyster makes pearls on its own by secreting nacre, or mother of pearl, around an irritant that gets into its shell. Contrary to popular belief, according to Humbert, that irritant is most often an invading worm that bored in, not a grain of sand.

In the case of Tahitian oysters, the pearls are often colorful—sometimes even black—due to the specific chemistry of the species.

At oyster farms, when the mollusks are large enough, a worker carefully pries open the shell and inserts a small nucleus, or bead, as well as a piece of mantle cut from another pearl oyster. That process is called grafting, and the bit of mantle helps the oyster start laying down nacre, explained Humbert.

Kamoka uses beads that have been cut from the mother of pearl in dead oyster shells, to a size of six to eight millimeters in diameter. Not every bead starts becoming a pearl, but those that do stretch out the oyster tissue around it, forming a small cavity.

To obtain another, larger pearl in the same oyster, farmers often take out the small pearl and replace it with a larger bead. In another two to three years, if all goes well, that bead will get covered with nacre, to form a large, shiny pearl.

After that pearl is harvested, the oyster is usually “sacrificed” because it is unlikely to produce another pearl so shiny. The meat may be consumed locally, although there isn’t an international market for the flesh of pearl oyster species. To replace the lost oysters, farmers usually collect spat, or larva, from the lagoon where they work.

In addition to the skilled labor that grafting requires, since 2003 Kamoka has also hired a revolving cast of young people from around the world, who come to work as part of the World Wide Opportunities on Organic Farms (WWOOF) program. Participants receive free room and board, as well as a chance to learn the trade, in exchange for their labor.

“We are kind of the ocean’s version of organic farming,” said Humbert.

One of the challenges of growing oysters in nets or baskets is that they get encrusted with barnacles, sponges, and other marine organisms more quickly than if they were left totally exposed in the open water. If oysters get too covered over, they don’t make pearls as large, so they have to be regularly cleaned.

“There are environmentally friendly and environmentally destructive ways of cleaning oysters,” said Kent E. Carpenter, a professor of biology at Old Dominion University in Virginia. Carpenter is an ichthyologist who recently conducted a study on the ecological impacts of Humbert’s farm (the work was supported by National Geographic and the Waitt Foundation).

Standard practice for years has been to pull dirty oysters onto the deck of a boat, and then blast them with a powerful stream of water, said Carpenter. “If the wash goes directly back into the lagoon, then you are adding a lot of organic material,” he explained. It may be too much for fish and other organisms to break down right away, so it could lead to algal blooms and deoxygenation—a small “dead zone.”

The process can also spread unwanted invertebrates like sponges around the farm, or introduce them to places in high numbers that upset the ecological balance.

In response, some oyster farmers started bringing their mollusks onto land to wash them, said Carpenter. The problem with that approach is that it can create a pool of nutrient-rich water. Put that in a holding pond, and it can turn into a smelly mess.

Humbert came up with a different solution. When his oysters need cleaning, he moves them from their deeper-water growing areas to very shallow areas, where there tend to be a host of different fish. The staff leaves the oysters there for several days, enough time for the hungry residents to scour them clean. Since the fish eat as they go, this process doesn’t cause nutrients to overload the water.

Humbert said he discovered that natural cleaning process accidentally, after he had left some oysters on a temporary holding platform in shallow water. He noticed that they were getting cleaner as the day went on.

“I thought, wait a minute, instead of spending all this time cleaning oysters, we could just let the fish do the work,” said Humbert.

To further assess how his new cleaning method may impact the lagoon, he asked the scientific community to conduct a study.

Last fall, Carpenter went to Ahe atoll with a team of researchers to count fish around the oyster farm. His group is working on a paper to submit to a peer-reviewed journal, but he said preliminary results show that the farm did increase the abundance of reef fishes in the area, especially butterflyfish and surgeonfish.

Carpenter said he observed a slight increase in the diversity of fishes too, although that effect was not statistically significant. He added that he would like to follow up with additional research to increase the sample size.

More work is also needed to pinpoint the reasons behind the increase in fish, although Carpenter said he suspects it may be a combination of factors, including the presence of additional food in the form of those encrusting organisms and the fact that the baskets and oysters themselves provide hiding places for small fish from predators.

Carpenter’s team also looked below the chains of pearl oysters. Oysters raised for food tend to be packed very close together, he noted, but that often leads to a buildup of waste under them, which can affect marine ecosystems. Pearl oysters can’t be packed too close, or they won’t produce pearls that are as large or shiny, he said.

Kamoka’s oysters are loosely packed into the nets, and the distance between each basket is typically around three feet (one meter), while the distance between the horizontal lines is at least 33 feet (10 meters), said Humbert. Carpenter said his team couldn’t detect any waste under those oysters.

Carpenter said additional research is needed to more fully understand the complete ecological impact of pearl farming. “But with the greatest threat to biodiversity in the oceans right now being overexploitation, having an industry that provides jobs but that is environmentally friendly is welcome,” he said.

Although pearl farmers face challenges from predators, storms, and sometimes even theft, what worries Humbert most is the international market. Cheaper, lower quality pearls have driven global prices down, and economic recession has hurt demand for luxury goods like jewelry.

Laurent Cartier, a PhD candidate in environmental sciences at the University of Basel in Switzerland, has been working with National Geographic Emerging Explorer Saleem Ali, director of the Centre for Social Responsibility in Mining at the University of Queensland in Australia, and Julie Nash, a PhD candidate in natural resources at the University of Vermont, to promote responsible pearl production. They’ve launched a website, www.sustainablepearls.org, and are planning a conference for next year. A new green certification program is a possibility, Cartier said, and may include ways for consumers to track individual pearls through the market, to make it more transparent.

“In the long run, only those producers who work in ecologically responsible ways will continue to produce top-quality pearls,” said Cartier.

For his part, Humbert said, “Our plan has been to tell our story and sell to people who resonate with our story. We can’t sell as a commodity, because we pay fair wages and take care of our people, and the way we clean oysters is probably more costly than powerwashing. It costs more money to do it the right way.”

“In the long run, only those producers who work in ecologically responsible ways will continue to produce top-quality pearls,”